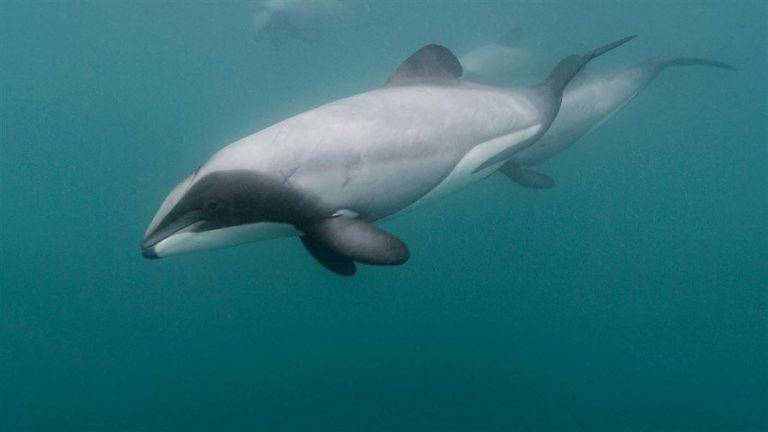 “Under water, particulate matter and phytoplankton scatter light. On a good day in the Hauraki Gulf, you might get 10m visibility. In busy harbours or estuaries, which Lyttelton is, it’s much less. But sound underwater travels about 4.5 times faster than in air. That’s why ocean mammals have evolved capabilities of generating and perceiving sound.”

Hector’s dolphins are no exception.

“They can see much further using their acoustic signals than they can using their eyes. They use echolocation to find out where predators and prey are underwater. If they stop clicking, they are effectively blind.”

This is good news for Styles Group, who have been using underwater devices to eavesdrop on Hector’s dolphin clicks at eight monitoring sites in Lyttelton Harbour since January 2017.

“It’s unique in its scale – this is the largest monitoring of this kind in the country. Scientifically, it’s great. We can tell when the animals are feeding, or not feeding. We can see seasonal trends, interannual trends and a lot of information we didn’t previously know.”

Matt says although Hector’s dolphins have been well studied with visual surveys, these can only be done in fine weather and at daytime. “These recorders are there 24/7 in good weather and in bad weather,” Matt says. “We are learning where Hector’s go at night. In the past this has largely been unknown.

In addition to the CPODs, which record dolphin clicks, there are also autonomous underwater recorders called SoundTraps, or underwater microphones, which are recording all the underwater noise in the inner harbour and the outer harbour.

These hydrophones pick up all underwater noise – whether it’s caused by piling, dredging, ships, pleasure boats, or even shrimps, wind and rain.

“The Soundtrap device is in four locations and is measuring the ambient soundscape – or the loudness – at each of these locations as activities occur in inner harbour.”

Each month, the data from the hydrophones and the CPODs are collected by Vision Environment and processed by Styles Group. This information is supplied to independent marine mammal biologists at Cawthron Institute, who will look at these two data sets together to assess the impacts of port noise on Hector’s dolphins.

A full year of baseline data was collected before dredging or piling started and Styles Group will collect data for another year after it’s completed before the scientists will be able to draw any conclusions.

What they’ll be hoping for is to understand is the impacts of human activities on Hector’s dolphins.

The data has potential to answer future questions about the dolphins, too.

“It’s a great project academically. We’re picking up seasonal trends, how much time is spent in each location, what they’re doing. We are just information gatherers at the moment, but at a later stage, this information could become valuable in other ways.”

One potential outcome could be nationwide underwater noise standards for Hectors and Maui dolphins.

“The exciting aspect of this project is the duration and amount of acoustic data that will be generated. This is now the longest running acoustic study in which a port company is proactively collecting the acoustic data necessary to assess noise effects on one of New Zealand’s marine mammals.”